DEBATE: Bologna beyond 2020: from structural changes to common fundamental values

The crisis of academic freedom in Europe emerged as the main theme during the conference «Bologna Process beyond 2020; Fundamental Values of the EHEA» in Bologna last month. 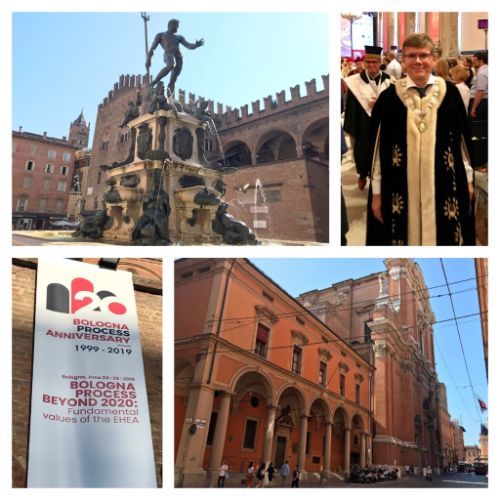 The aim of the conference was partly to celebrate the 20th anniversary of the Bologna declaration and partly to feed in to the Ministerial conference «Future of the Bologna process» that takes place in Rome next year. Over 200 university rectors and 800 other stakeholders participated. Cristina Ghitulica set the tone during the opening session. It is time to change from «focus on structural changes to common fundamental values», she said.

The Bologna declaration, signed in 1999 by 29 European ministers of higher education, has had great impact on education in Europe. The declaration set in motion an unprecedented and ambitious process of pan-European integration in an area traditionally marked by diversity of national systems. The intention was to create a European Area of Higher Education by 2010, with a common degree structure in Europe, strengthening quality assurance, and make recognition of qualifications and periods of study easier. The process has undoubtedly contributed to shaping the higher education landscape in Europe and within the 48 countries that over time has signed the declaration. Yet the Bologna process is not a case of “mission accomplished”. After 20 years of policy coordination in Europe there is a need to re-think the main paths forward.

When going forward we need to clearly address the fundamental values of higher education: academic freedom, institutional autonomy and how we contribute to the public good. These issues were somewhat left in the shadow by the attention attached to the structural issues involved in creating a common higher education area during the first 20 year of the Bologna-process. At the same time, alarming trends have emerged during these years - trends that challenge the value basis of higher education. The marketization of the universities is a key trend in this respect. To us it is fundamental that our students are not customers nor clients. We should rather be eager to enroll and involve them properly in the learned community of the university. This is a success-factor for the University of Oslo in the years to come.

We also need to confront other constraints affecting both our institutional autonomy and our academic freedom. We need to be reflective and responsive. The possible restrictive impact of single source financing of major initiatives is obvious and a diversification of the sources of revenue should be sought. We should furthermore examine the way in which we use our autonomy and how we give weight to some concerns over others and how we balance and match different expectations that are directed at universities; let alone the expectations that we direct at ourselves. After all, academic freedom goes hand in hand with societal responsibility, with academic responsibility.

If we should describe the way forward for European universities and the European Higher Education Area it could be «back to the basics» and the roots of the Bologna process. Its focus on openness and cooperation was a follow-up from the universities’ own declaration of values in European higher education from 1988; The Magna Charta Universitatum, which was originally signed by around 400 European university rectors and by now, almost 900 universities around the world. This year the Magna Charta Observatory is considering an update of the charter, to reflect changes in the sector and its relation to society.

We welcome such an update and the recent declaration from the Global forum on Academic freedom, institutional autonomy and the future of democracy, resulting from a conference in The Council of Europe, Strasbourg, June 20-21st, constitutes an excellent basis for such an update. This answers the request by, Liviu Matei, provost of the Central European University. He was clear in his address in Bologna; at present, an authoritative definition of academic freedom does not exist. A common European Educational Area reference for academic freedom is much needed. This must be a central topic during the Ministerial conference «Future of the Bologna process» in Rome next year.

(This article was first published in "Rektorbloggen" June 26th, 2019)